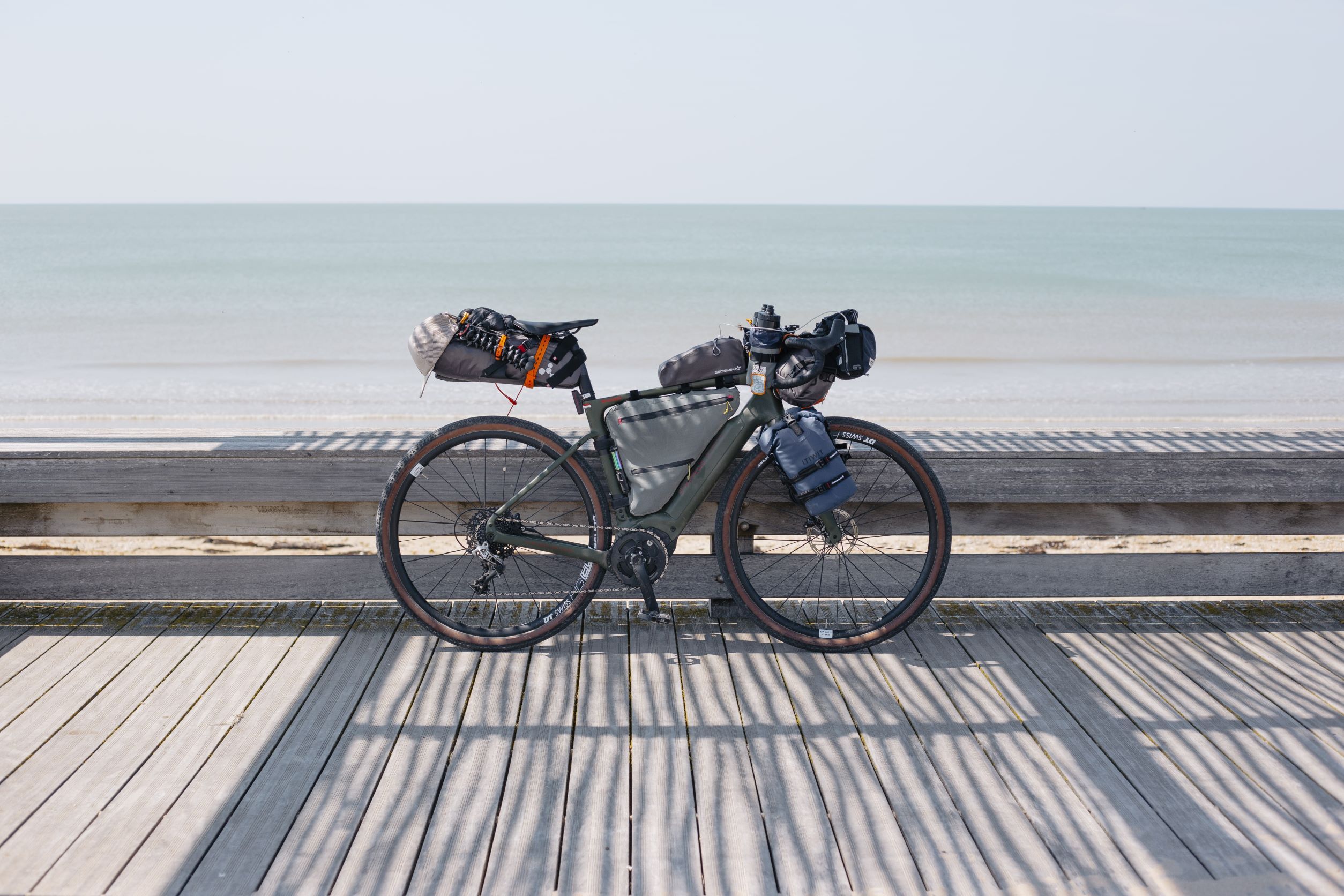 “It was a public holiday and I was in trouble. Everything was closed and I stopped asking for something to eat. I just wanted a bit of pasta to fill my meal and I ended up with a whole package that I devoured and some ham kindly offered !”. After three weeks traveling the roads of Western France, Florian, our MONTAGEL (eGravel) ambassador, tells us his story over the miles, nights outside and encounters.

On a whim, Florian tells us that he wants to travel more than 1800 kilometers with our electric Gravel in autonomy. Everything goes very quickly, in just a few days, he configures his bike himself. Most bags are designed and sewn by hand to match the geometry of the bike. The bikepacking adventure can begin. The first step is to reach Lyon by train. On his arrival, he goes to Grimpeurs Cyclist house, a well-known café for cyclists before taking the first pedal strokes and leaving town. Thanks to the Komoot app and her Wahoo GPS, Flo just has to follow the map already drawn. The aim is to take as many secondary roads and old railway lines as possible to the Vélocénie in Chartres. It crosses the Charolais and its pastures ; “There are good smells, you see animals and, above all, there is no noise, it is calm.” He also crosses paths with other travelers: “ There were these two guys who went to Sweden with the music on their bikes, we chatted for 20 kilometers, their anecdotes and their nights outside ”. The rest of the time, he will be alone with his bike, his thoughts and the goal of finding a different bivouac each night. Very often, it will be at the campsite to recharge the battery of the bike and also the traveler. The welcome is always warm. Routine sets in. Unpacking the bags. Setting up the tent. Meals preparation : broth, noodles, sardines in oil.

And it all starts again in the morning. On the road, Flo prefers the small shops, the few bakeries and bistros crossed on the way, which are always an opportunity to stock up, to feast and sometimes to take a break. The welcome is always friendly, it's good and it's local. “Sometimes they even give you an extra croissant when you're a traveler. Contact is easier, especially when you are alone. Everyone has lots of questions. Where do you come from ? Where are you going ? And they are surprised !”. The days pass and Flo gets closer and closer to Mont St Michel, one of the objectives of the adventure after crossing the Vélocénie with its rivers and tall grass. He will come across some wild animals there: rabbits, deer, pheasants, coypu, and some unidentified noises in the foliage… After three weeks, 1800 kilometers and a stage in Saint Malo, he only wants one thing, get back on the road. The electric bike is within everyone's reach, he says, “I was amazed by the possibility it can offer you to go further… but the most important thing is the journey and the road you will borrow. You have to go at your own pace, have fun and have fun !”.

Today, Flo has just moved to Saint Malo where he still rides his MONTAGEL. He has also developed a new talent, creator of tailor-made bags for your adventures. Don't hesitate to tell him about your projects !